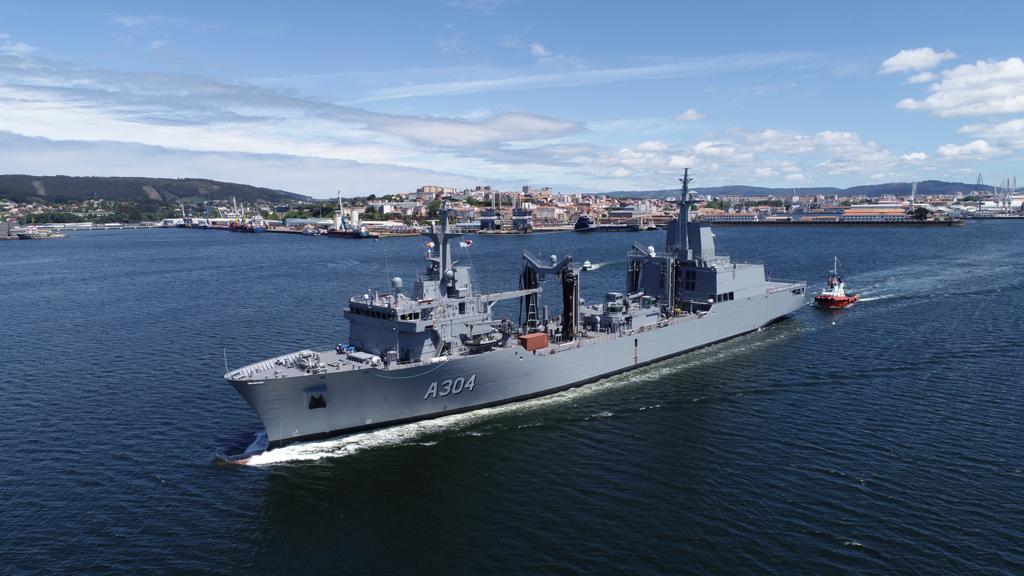 Australian ambassador to Spain, Her Excellency Ms Sophia McIntyre, farewelled NUSHIP Stalwart, together with Navantia’s president, Mr Ricardo Domínguez and the director of the Ferrol shipyard, Mr Eduardo Dobarro, as part of a small ceremony. After the speeches, the rope launching manoeuver was carried out and the anthems of Australia and Spain were played.

Navantia’s Global President, Mr Ricardo Domínguez, reaffirmed the commitment of the company by stating, “Whilst the departure of NUSHIP Stalwart today might represent the conclusion of the SEA1654-3 program, this does not mean the end of our relationship with Australia.”

“Australia has relied on Navantia to provide a decisive capacity to achieve its strategic objectives in the maritime field. Navantia, through Navantia Australia, will continue to be Australia’s partner now and in the future”.

The director of the shipyard, Eduardo Dobarro, acknowledged the efforts and contributions made by all subcontractors, including Navantia Australia personnel, Teekay, Raytheon, SAAB, the Royal Australian Navy and the Department of Defence involved with the delivery of the program.

Stalwart will spend the next 30 days navigating world oceans before arriving at her homeport of HMAS Stirling, in Western Australia. After her arrival in Western Australia, Stalwart will then undergo a final fit-out where the installation and testing of the combat and communications systems, as well as some logistics areas will be completed by Australian industry.

Stalwart is the second and final ship of the Royal Australian Navy’s new Supply Class Auxiliary Oiler Replenishment ships, which will operate in a joint manner to provide operational support for the deployed naval or combat forces operating far from the port on the high seas for longer periods.

The contract for the two AOR vessels, signed with the Commonwealth of Australia in May 2016. The contract also includes their sustainment, for which Navantia Australia is developing an advanced asset management model to support the life cycle during the first five years.

Australia is a strategic client for Navantia Australia. When the second AOR is operational, the Royal Australian Navy will have in service 19 naval units (or over 110,000 tonnes) designed by Navantia, for which Navantia Australia is now the Design Authority and involved in providing through-life support.

Navantia Australia designs, integrates and supports naval maritime platforms and systems for the Royal Australian Navy. We are recognised as a Design Authority by the Commonwealth of Australia for the Canberra Class Landing Helicopter Docks (LHD) and Landing Craft, Hobart Class Guided Missile Destroyers (DDG) and Supply Class Auxiliary Oiler Replenishment (AOR) Ships. At Navantia Australia, we are committed to growing our local workforce and links to the Australian Supply Chain to best support the growth of a truly Australian naval shipbuilding and sustainment industry.